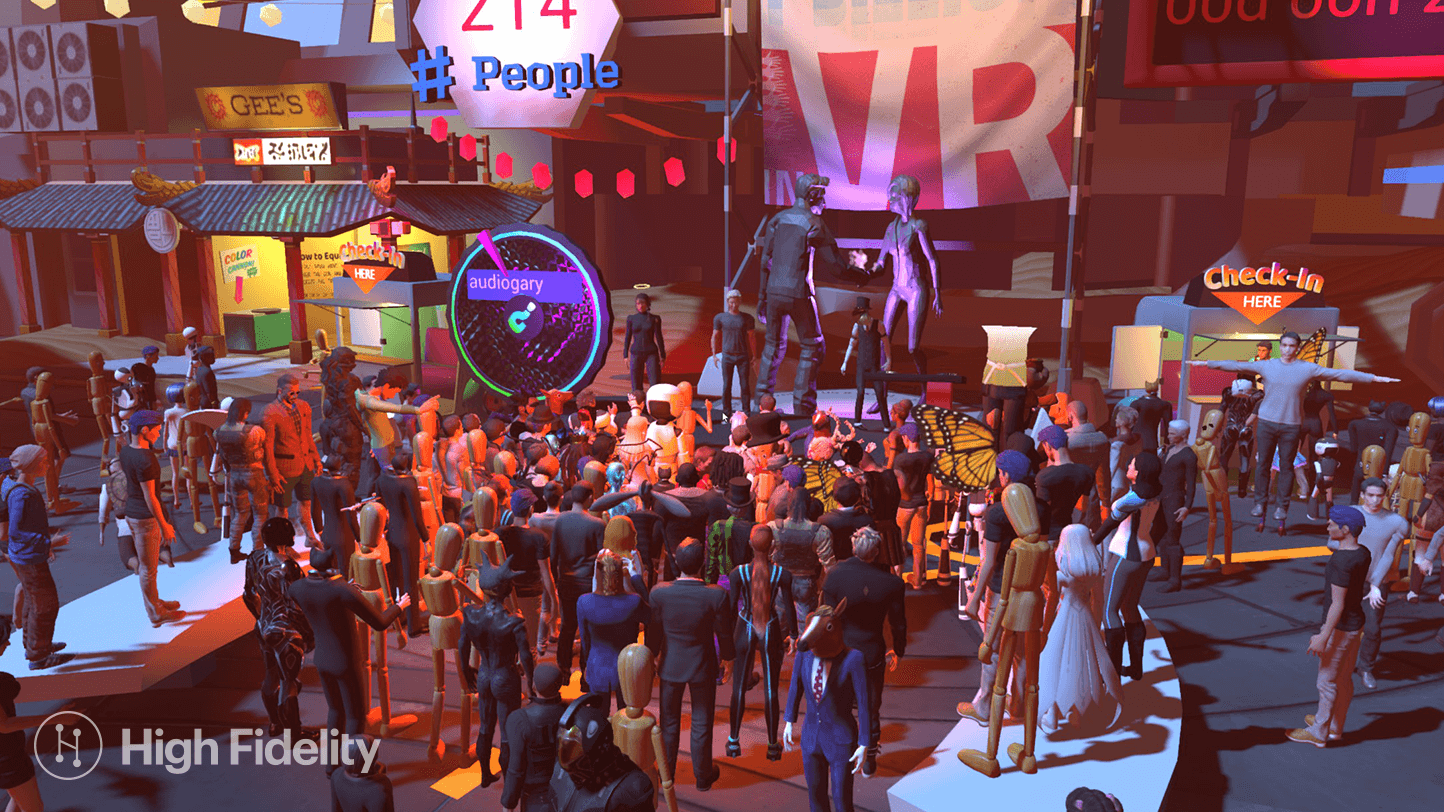 Our server logs from Friday confirm that we hit 256 people concurrent, all able to hear and see each other. That’s a new high for us, and we think it’s possibly a world record for a VR-enabled multi-user environment.

The most amazing thing, though, is what’s impossible to capture in a blog post — the excitement of having that many people from all over the world together in one virtual place. I really hope you’ll join us for the next one and try it. I called out names as people joined, and afterward the official event ended, I walked around and tried to shake everyone’s hand and become friends. To start, here is a 360 image taken by Xaos Princess:

Perfect 3D audio for 250 people: Although it was loud like a real crowd, the audio server performed well and delivered low-latency transparent audio for all. You could hear me and DJ Limbs Akimbo from the stage, whisper to the person next to you, and hear groups talking in the distance. With that many people talking — and sometimes cheering — computing the 3D audio for each ear of the listeners required about 200 GFLOPS from the 72-core server we were using.

Bodies in motion around you: To update a real-time crowd of 256 avatars, all moving their bodies, our avatar server must receive, process and re-transmit more than 1 million joint poses per second, for about 1.2Gbps of output traffic.

High-performance server cluster, but still affordable: For this load test we ran five servers on Amazon 72-core xLarge instances. Peak outbound bandwidth was 1.5 Gigabits per second and we delivered more than 675 Gigabytes of data. Although these are big machines, using them for the half-hour duration of the event cost less than $10, making the bandwidth used the most expensive part at about $100. But that’s very affordable —you can throw a VR event for 250 people at a total hosting cost of around $110. That’s a tiny fraction of what it would cost to rent out an event space.

It’s hard to find an ideal time to do these load tests that works for all our users. It’s why we reward everyone that registers and shows up to the event with gifts, and we also give away some cool stuff. It means a lot that users want to be a part of our journey to build an Internet-scale VR technology.

Congrats to our three winners AudioGary, npodach, and Jay (who joined the event from our San Francisco VR Studio in SOMA) — each of them receive a gift certificate to get a custom avatar scan from our friends at Doob3D.

Will We See You on September 7? Earn HFC!

We’ll continue to offer the rewards and prizes we have given out at the last two load test events. We’re also adding an option to redeem your rewards in High Fidelity Coin (HFC). You will need to set up your High Fidelity Wallet so you can claim that reward. With HFC you can purchase items from High Fidelity’s Marketplace, including avatars, wearables for your avatars, and other virtual goods.