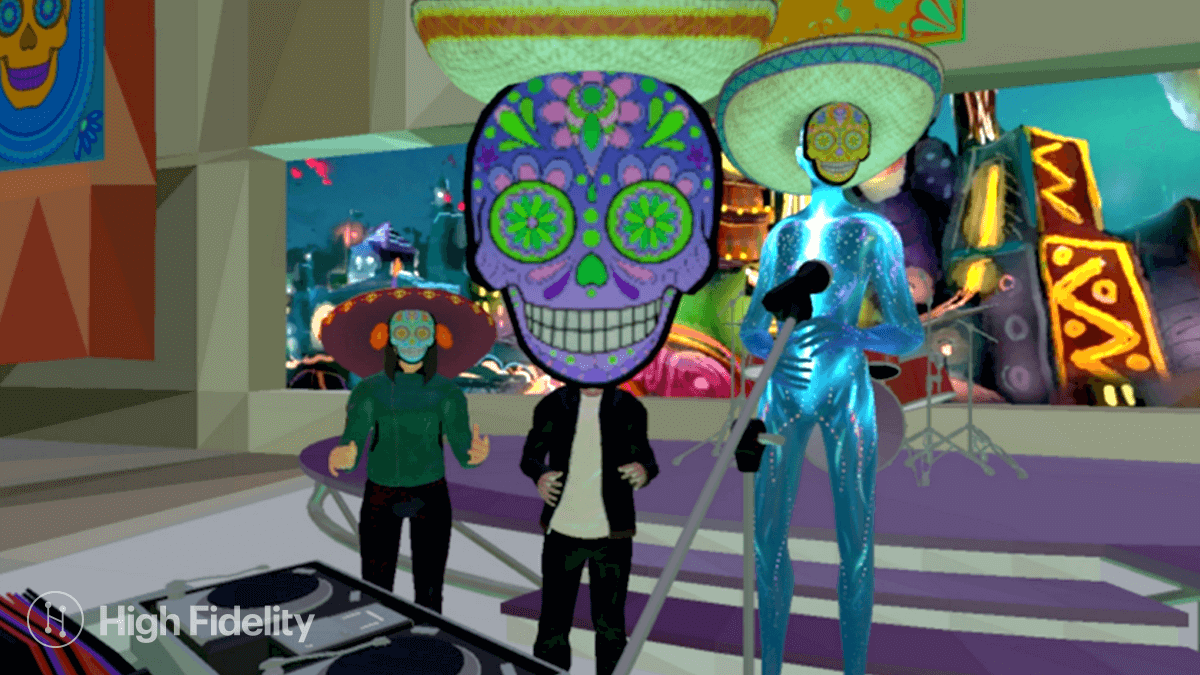 “What is there to do here?”

High Fidelity is a VR platform.

The path for marketing a video game is pretty well established. It’s a little bit harder to connect users to a new VR chat room, conferencing app, or Learning Management System. We’re not making any of these, but rather a platform on which such apps can be made by third party individuals and companies. Once someone has our browser-like “Interface” software, people can connect to any app or experience on our platform — if they know where to go.

The tech press is full of stories about “The Chicken and Egg problem”: adoption requires interesting content, but content development follows adoption. Verticals such as gaming make that problem a little more focused, but games still require massive up-front investment in technology, content, and marketing. We are instead betting on user-generated content in both the early market and, as with the Internet in general, we expect user-generated content to be the big story in mainstream adoption as well. This makes it that much more important to hook users up with interesting people, places, and things in-world. The early Web used human-curated directories for news, financial info, games, and so forth, but we’re not quite sure what categories are going to have the most interesting initial experiences. And neither do our users!

We want an easy way for users to find interesting people, places, and things to explore, which doesn’t require High Fidelity, Inc. to pick and decide what’s hot. We also want an easy way for creators to let others know about their content, without having to go through us nor a third party to market it.

One powerful model that has emerged for recognizing interest in user-generated content is crowd curation: a strong signal is produced by real user activity, and used to drive suggestions.

The signal can be explicit endorsement (likes, pins, tweets, and links) or implicit actions (achievements, or funnel actions such as visiting or building). The signals are weighted in favor of the users you value most: friends, strangers with lots of “karma”, or sites with lots of links to them.

There are various ways in which this information is then fed back to users. Facebook and Twitter provide a feed of interesting activity. Google offers suggestions as you type, and more suggestions after you press return. Amazon tells you at checkout that people who bought X also bought Y. However, the underlying crowd curation concept is roughly the same, and it has accelerated early growth (Twitter, Zynga), and ultimately provided enormous value to large communities and their users (Google, Facebook, eBay).

Of course, these systems don’t crawl High Fidelity virtual worlds, so we need to make our own crowd curation system, or find a way to expose aspects of our virtual world to the Web, or both. But more importantly, what do we want to share?

So, what should we suggest to our users? Ultimately, we want to suggest anything that will give a great experience: people to meet or catch up with, places to experience, and things from the marketplace to use wherever you are. But in these early days, your friends are not likely to have gear or to be online at any given moment. Places are under construction and without reputation. The marketplace is just forming.

Initially then, we’re starting with just two kinds of suggestions:

2. Even without necessarily knowing another High Fidelity user, it’s definitely more fun to go to places where people are. Even though we’re just in beta, there are always a few places that have people gathered, but they’re not always the same places. It’s hard for a person to know where to look. So we’re making suggestions out of public places, ordered by the number of people currently in them. No need for anyone to do or make anything on this one, as we pick up concurrency numbers automatically from those domains that share this info. (Anyone who makes a domain can control access to it.)

These suggestions appear when you press the “Go To” button, which also brings up an address bar where you can directly enter a known person or place, or search for suggestions (just like a Web browser’s address bar). I can imagine someday offering information about related content in various situations, or a real time messaging and ticker widget for those who want to keep tabs on the latest happenings, but primarily we just want to allow people to “pull” suggestions when they are specifically looking for something to do.

Suggestions are available to both anonymous and logged in users: we don’t want to require a login to use High Fidelity. However, we would like to offer personalized feeds in the future based on your (optional) login. We also don’t share anything that you have not explicitly shared, and such sharing links to your (self-selected, non-real-world) username.

Sharing and searching are not restricted to our system. Every suggestion has a public Web page that can be shared on Facebook or Twitter, or (soon) searched on Google and other search engines. Clicking the picture or link on that page in a browser brings you to that same place in-world if you have Interface installed, just as if you had clicked on the suggestion within Interface. We feel this will make it easier for content creators to promote their places, snapshots, and eventually, marketplace items. We hope to create a “virtuous circle”, in which search and sharing brings people in through external networks that are much bigger than ours, introduces them to more content, and makes it easy for them to further make and share.

In the two weeks before we introduced an early form of this, a bit more than a third of our beta users were within 10 meters of another user in-world on any given day (excluding planned gatherings). Then we introduced a prototype of the concurrency suggestions (“N people are hanging out in some place name”), and over the next two weeks, nearly half each day’s users were near another a some point in their day. Since then, we’ve done other things to increase average concurrency, and we’re now near 100%.

I don’t have good historical data on snapshots, and the new data is quite volatile. Our private alpha “random image thread” averaged a healthy five entries a day for more than two years, including entries with no pictures and entries with multiple pictures. Now, on days when something interesting is happening, we get 20 or 30 explicitly shared pictures, with most days generating eight or more. Indeed, so many new users are taking snapshots in the “welcome” area, that we’ve had to modify the user interface to group all the snapshots taken in the same place.

Next: How we do that