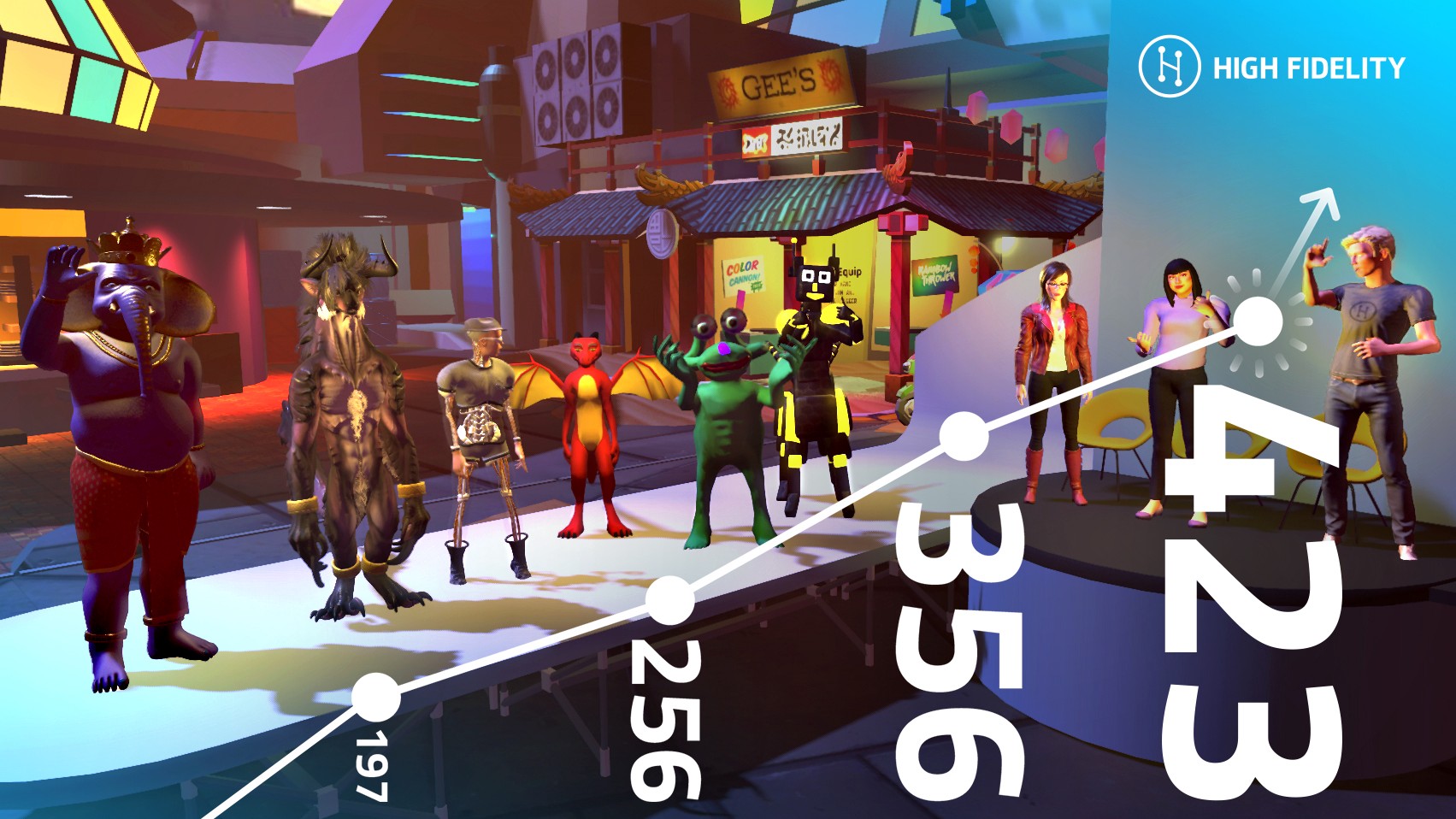 Over 700 visitors from 45 countries joined our October 6 load test, and we reached peak concurrency of 423 people!

This is the fourth post in a series that recaps the results of monthly load tests High Fidelity conducts. These tests are designed to push the limits of our platform’s capabilities as we work to build a technology that will reach Internet-scale and someday support a billion users. It’s early days.

In the most recent load test, we successfully hosted our new live trivia game, held an amazing Best Avatar Contest where I was one of three judges, played “Where’s Reynaldo,” and gave out more than $9,000 in rewards and prizes. Technical performance was measurably better than our prior test, so big thanks to everyone who has helped us debug by coming. There were streamers and media outlets running around doing live interviews!

We reached 423 avatars together at one time in hifi://TheSpot. Peak concurrency occurred at exactly 11:30 am PDT, and overall more than 700 users logged in from 45 different countries around the world.

We had seven contestants enter the contest —123.Basinsky.321, Ultranique, Silverfish, Davwyn, Dalek, EgoAnt, and DarkEcoKat — thank you for participating. You made it tough on us as judges. One had eyeballs on stalks that he poked at with his fingers while walking the runway (afterward we all got a chance to try). There was a red dragon with flowing wings, a ‘Voxeltar’ that looked like Minecraft on steroids, and a honeybee-styled Sphinx with procedurally-animated legs. Each was a unique and amazing avatar with much more variation and detail than I anticipated being possible with the limited notice we had given for this first contest. High Fidelity colleague Jazmin Cano and special guest Kaceytron joined me on the judging panel, and we were blown away by all of the entries. Contestants built their avatars using a range of different 3D software tools including Blender, Mixamo, and others. Check out the physics applied to this avatar’s eyeballs:

The two runners-up, DarkEcoKat and Delak, were incredibly different and equally impressive for different reasons. DarkEcoKat had beautiful moving hair, and Dalek’s avatar had an Ex-Machina style cutaway body with visible bones. Congrats to them both for walking away with US$100 each in HFC.

First place went to Ultranique — an incredible blue elephant (inspired by the Hindu god Ganesha) with trunk and ears that moved. Ultranique took home US$300 in HFC (30,000 — one HFC is one penny). Congrats!

We loved the experience of celebrating creators in the community. Stay tuned for more creator-contests and bigger prizes!

And of Course, There Were Bugs

Some attendees sometimes saw some avatars as white spheres. We knew the cause of that bug going into the event, but, unfortunately, we were not confident that we could safely deploy a patch before the event. In addition, avatar motion still needs more compression and interpolation — that’s coming. Handshakes were also clumsy and not working as consistently as they should, so we are going to revamp that feature. That said, the experience was much improved from previous load tests.

So What’s Next? It’s Your Turn

One objective of these large-scale load tests has been to demonstrate the potential of using VR for big events with lots of people/avatars. This latest version of the High Fidelity server can support enough people for a big company meeting, live music events, conferences, festivals, talks, large classrooms, or whatever else you can dream up. If you have an idea for an especially newsworthy event and would like our help setting up, don’t hesitate to reach out to us.

FUTVRE LANDS Virtual Reality Festival is the next large-scale event scheduled for Saturday, November 17. Learn more and register now. Early-registrants will qualify for a VIP experience. I hope to see you there.