Voice Chat Apps and the Future of Digital Content

The average U.S. adult spends nearly half of each day staring at screens (“screens” include phones, laptops, televisions, etc.) — data supporting this goes back to 2016 from Nielsen.

How about more recent research? In 2020, as you might imagine, time spent on screens has only increased. Here’s the 2020 Nielsen report. 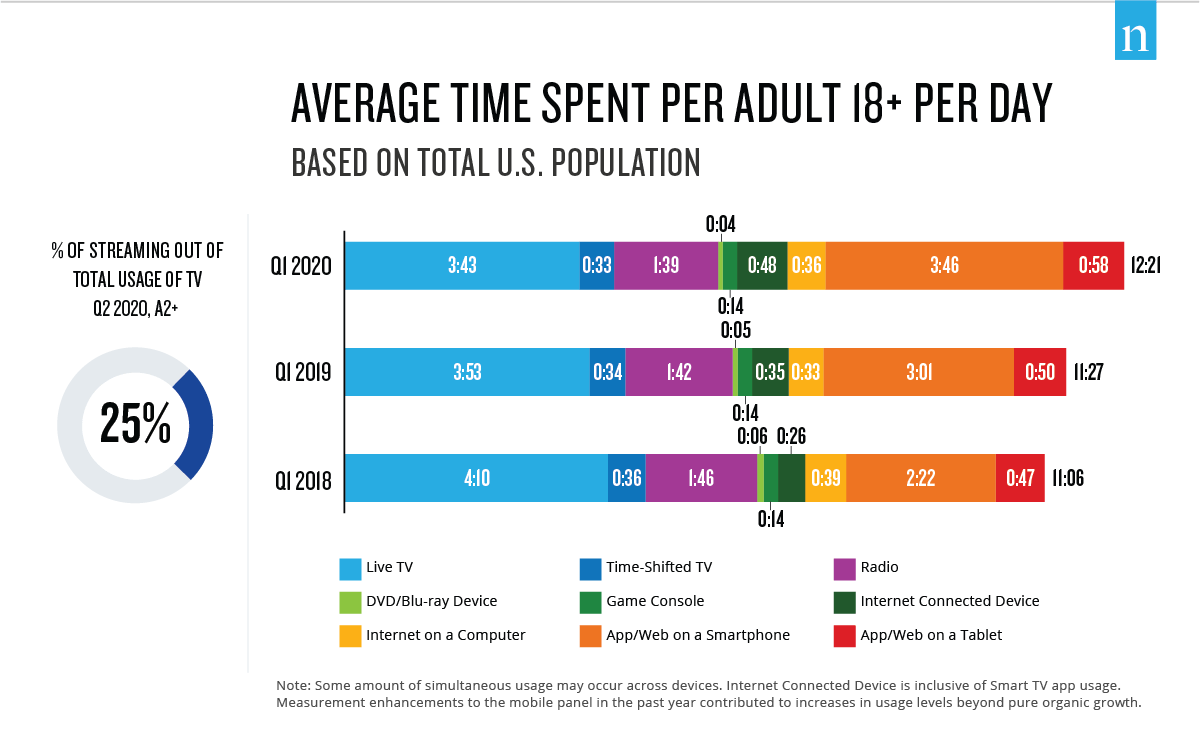 Another study found something similar. “Polling of 2,000 adults in the U.S. found more than 6,259 hours a year are spent glued to gadgets such as phones, laptops and televisions. Up to four and a half hours a day will be spent looking at TV screens, with almost five hours staring at laptops and three hours and 12 minutes using gaming devices. Smartphones also take up an astonishing four hours and 33 minutes of an adult’s daily screen time.” Even if we’re being skeptical and notice the above study is commissioned from a company that is interested in promoting eye health, the statistics are similar to the Nielsen report.

And how about in 2021? “The coronavirus pandemic has increased our collective screen time, and that’s particularly true on mobile devices. According to a new report from mobile data and analytics firm App Annie, global consumers are now spending an average of 4.2 hours per day using apps on their smartphones, an increase of 30% from just two years prior. In some markets, the average is even higher — more than five hours,” writes Sarah Perez.

Other phenomena have been emerging at the same time, though: The use of voice chat apps, and the concept of “voice-first” devices. Of course, these concepts aren’t new, but their popularity has certainly been rapidly increasing.

And as you might have already guessed, what does using voice-first devices and audio-only apps allow one to do? Look away from their screen — while users actually enjoy more social connection due to the audio component.

Recently, James Vincent wrote for the Verge: "Communication can become much more natural [with voice-first devices]. Just in the past few years have people spent an exorbitant amount of time on screens. Voice-first wants to enable people to free their hands and eyes so they can focus on the projects that are in the physical world. Any digital interaction can be shifted from the world of screens to a conversation with a smart speaker. We want to make people’s interactions with technology more natural so they can accomplish more with their time.”

Yes, voice-first devices certainly are efficient. “Voice is an efficient input modality: It allows users to give commands to the system quickly, on their own terms. Hands-free control lets users multitask, and effective natural language processing bypasses the need for complex navigation menus, at least for familiar tasks and known commands,” writes Kathryn Whitenton for the Nielsen Norman Group.

In addition to efficiency, using voice-first devices may also improve the user’s emotional well-being and sense of social connection, as well as allow for more accessibility. “Depending on what kind of mobility issues a user has, being able to use voice activation may seriously improve the user’s ability to navigate their world.”

Others have also written about how it is a more natural way to interact, too. “Rather than typing or interacting with other user interfaces, the voice user interface allows us to be ‘liberated’ from our screens. Users of voice-activated devices regularly report choosing to use them because voice control is more natural than typing, and because it is a more conversational experience.”

Voice technology is surging; here is a collection of recent statistics. “Across the UK, US, and Germany markets surveyed, 60% of people are voice users. That’s a huge jump from previous years.”

The World Economic Forum shared an article back in 2019 titled “3 ways voice technology will change your life,” and indeed, it is. “Innovators from Fortune 500 companies, cutting edge start-ups, academic institutions and other public sector organizations are pushing the limits of voice technology through the exploration of areas including accent and language, emotions, multi-voices and context adaptation.”

Ilker Koksal wrote why voice-first devices are the next big thing even back in 2018: “When you need to solve a problem that involves another person, what’s the best way to solve it? By having a conversation. We’re finally able to communicate with our devices — phones, computers, wearable devices, smart speakers and more — the same way we talk to one another when we need to get things done.”

And remember, we mentioned two related phenomena earlier: Voice-first devices, and audio chat apps. Both have the core component of sound, but are of course different. On audio chatting apps, you’re speaking to other humans, while still spending less screen time. Let’s get into that now...

Earlier we referenced this article in TechCrunch when discussing Nielsen’s 2020 report in comparison with another in 2021, and how smartphone screen time is increasing. But which apps specifically? One trend you may have noticed blowing up in the last year is social audio, and the rise of these voice chat apps.

“Clubhouse also made a showing on the ‘breakout’ charts, as it gained ground in non-U.S. markets like Germany and Japan, where it ranked No. 4 and No. 3, respectively,” Sarah Perez writes. Hosting more than 10+ million weekly active users, Clubhouse isn’t the only voice chat app around, either. The number of social audio apps and platforms is growing by the day — Facebook launched Live Audio Rooms, Twitter launched Spaces, and there’s no reason to think other voice chat apps beyond the big social media platforms won’t gain traction, too: For instance, check out these ones.

The benefits of these voice chat apps are big, too. Voices create a more intimate conversation than text and allow you to go about your day — take a walk, fold the laundry, etc. You don’t need to be endlessly scrolling to enjoy audio.

Digital content is evolving to include this sort of audio from voice chat apps, too. Clubhouse recently released Clips: “We want to make it easier for creators to share great moments and grow their audiences. Clips will allow anyone to share 30-second clips of public rooms, so more people on the Internet can discover and join your club.” (Of course, podcasts, audiobooks, and spoken word audio in general have been on the rise for years already: Check out this report.)

Another huge trend emerging with voice chat apps that only helps people get even closer thanks to the natural conversation it helps foster: Spatial audio. Clubhouse recently implemented it, Apple seems to be integrating it into… every product they can, and other big companies are now, too — Amazon (“Spatial audio is the buzziest music streaming feature of 2021”), Google, and Netflix included.

How does spatial audio help foster natural conversation on voice chat apps? It mimics what people sound like in real life — it creates a “lively dinner” feeling where you can still actually understand people, thanks to the audio being spatialized — AKA coming from different areas in space as opposed to a single location (like mono audio). We’ve written more about that in this post if you’re curious to learn more, along with a great video example of the “cocktail party effect.

Voice chat apps, voice-first devices, audio networking, podcasts… they’re all here to stay. If you have an app that has audio and are interested in integrating spatial audio, learn more below.